Strength, courage, loyalty and power: the Spartan helmet has always evoked all this and is a wonderful symbol.

Imagine the Spartan helmet dropped on the face of the soldiers before the battle, with their eyes shining behind the crack.

Imagine the Spartan helmet raised, on the forehead of the infantrymen parading in peacetime.

Imagine the Spartan helmet on the ground, marked by the shots of the enemy, on the battlefield after the melee.

Fascinated by this powerful symbol, I studied it in its form, its atmosphere and its meaning. Here is all you need to know about the Spartan helmet.

It was the helmet of the Greeks 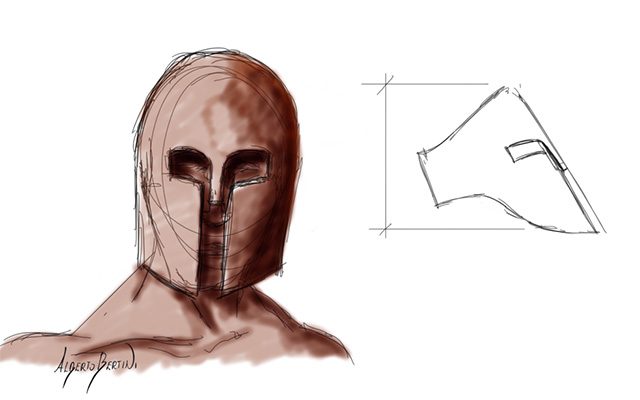 The Spartan helmet was so well made that it was widespread throughout Classical Greece. Shining on the heads of the Sparta soldiers, we find it in the ranks of all the proud Greek hoplites.

The real name of what we call “Spartan helmet” is actually “Corinthian helmet“: it is born in the famous Corinth, a prosperous and fearsome city. In ancient times, in fact, there were many types of helmet, but this soon became the most widespread for its total protection of the head.

Any contraindication? Completely covering the ears, it make difficult to hear and in battle this could be fatal for soldiers. The slit of the eyes, then, as you can imagine, did not allow a complete view and forced the infantrymen in combat to completely rotate the head to look all around.

It was the helmet of Sparta – The Spartan Symbol 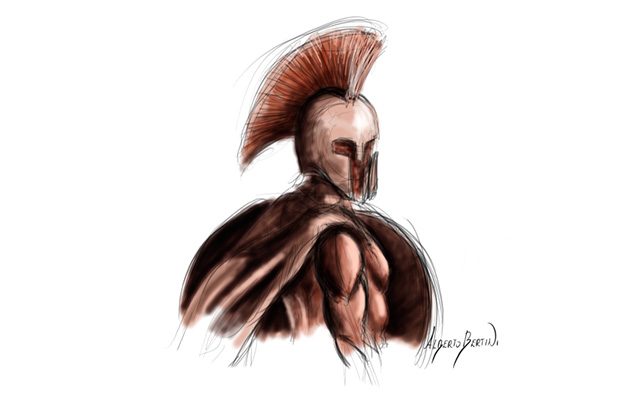 Regardless of historical events, the wonder of a symbol is linked to the images and emotions it can create. This is why we call it Spartan Helm: because we want to evoke the military power of the Spartan army.

The extraordinary film “300” has thrilled me so much and those proud, brave and noble soldiers represent a fantastic ideal. A Spartan warrior is like 100 soldiers together: in the fury of battle, a single infantryman of Ares drag hundreds of Persian soldiers into death. On their mighty bodies, along with the blood-red cape, the helmet of the Greeks shines: the Spartan helmet.

The Spartan soldier is history: trained as a child, at the age of seven, he learns loyalty and fears neither the enemy, nor pain, nor death.

The Spartan helmet is also the Helm of Rome. Few people know it, but the same helmet that covered the faces of Spartan soldiers, protected the noble soldiers of the mysterious Etruscans, lords of Central Italy before Rome.

Rome itself, in the fascinating times of the Republic, had a Greek helmet. The Romans, in fact, were very pragmatic and immediately recognized the potential and effectiveness of the Helm of the Etruscans and the Greeks. This is how this powerful symbol recalls in my mind the glory of Rome, with the powerful Latin infantrymen fighting against Hannibal and the enemies of the most majestic city of the Ancient World.

It is the helmet of beauty and power

Forged in bronze, silver and gold, the Spartan helmet has a beautiful shape, but its materials are also wonderful. The Greeks wore heavy bronze helmets but later we will find them also in iron, lighter and more resistant.

The Greek Helmet was beautiful and that’s why the artists put it on the head of the Gods, as Athena, goddess of Wisdom, and Ares, fearsome God of War.

What I call Spartan Helmet is an important symbol for two of the most powerful armies in history: the Republic of San Marco and the United States of America.

The Republic of Venice, protected by the Lion of San Marco, was for over a thousand years a military power feared in all the seas: its galleys dominated the Mediterranean and its soldiers, covered by the helmet, boarded the enemy ships with the cry of “San Marco”, a battle cry still used by the Italian marines: the Lagunari. 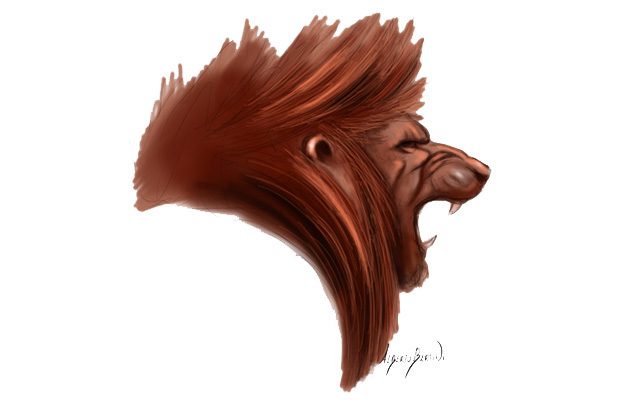 It was the Venetians who used the Greek helmet as a gift: the elegant Ambassadors of the Lion offered these helmets as gifts, richly ornamented, forged in silver and gold.

And the United States Army? The USMA (United States Military Academy), one of the most important military academies in America, has a beautiful shield with the profile of a Spartan Helmet in the middle.

My inspiration for the Spartan ring

I am terribly fascinated by the powerful atmosphere evokated the symbol of the Spartan helmet. In my jewelry workshop, I tried to transform all these messages into a Ring: elegant but martial, essential but majestic, precious but solid.

At first I had put in a lot of decorations and arrages, but then I realized that I was betraying the classic spirit of Spartan helmet. I simplified the lines as much as possible, I made it clean, smooth, essential.

I tried to tell, in its form, a fragrance of eternity and power.

The ring  is a message, the story of a world. My Spartan Helmet Ring wants to tell about an ancient and noble world, made of courage and loyalty, of strength and poetry.