The skull, the rose and Mexico

When I think about laughing in the face of death, the Mexicans always come to mind. My passion for the skull and the rose was born some years ago, when I lived abroad.

Eduardo, a great friend of mine from Mexico City, gave me a beautiful statuette of a colored skull with a red flower drawn on the forehead. Cheerful and lively, this Mexican skull with a rose inspired me and made me reflect on this symbol.

What is the meaning of the Mexican skull with rose?
First things first, let me make two premises:

Life and death: the skull with rose, a poweful contrast 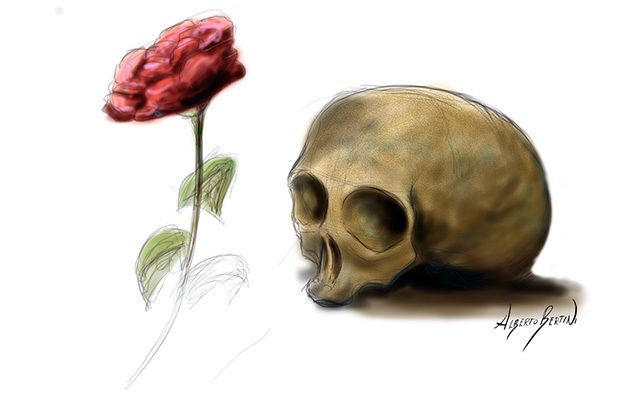 A cold skull is a powerful symbol of death. Put a skull next to a flower in the Mexican way, and the meaning changes completely: the beauty, the balance and the joyfulness of the petals will transform the disquieting head  into a new, cheerful symbol.

The red rose, beautiful and sensual, tells the intense marvel of life. Its petals move with the wind, they do not last long, the stem that supports it is fragile, its colors change quickly. The contrast with the immobile, white and arid skull is very powerful and incredibly enhances the rose and its meaning of life.

If you think about it, in fact, the value of a good is also linked to its scarcity: gold and silver, for example, are precious metals not only because they are beautiful, but also because they are rare. Here, our life takes on an incredible value when we place it next to death: vital time becomes a rare, precious good. Wow!

Laugh in the face of Death: the Dia de Muertos

The Mexican culture imagines the reign of Death as a happy and colorful world, full of vitality and joy. As a matter of fact, turning death into a happy moment is a brilliant idea. It is not the Hades of the classics, sad and gray, but neither is the Paradise of the monotheists, serious and solemn: it is a spiritual and playful afterlife.

A beautiful extract of this afterlife is in the movie “Coco”, Disney’s masterpiece and in Tim Burton’s Disney animation “The Corpse Bride”.

Also, there is the Dia de Muertos, in Mexico. Colored faces, painted skulls, smiling skeletons. Among these, there is Catrina, a smiling skull, fully dressed, invented by an illustrator at the end of the nineteenth century. Always lively and elegant, Catrina has a hat full of roses.

Enjoy th balance: the symmetry of the skull and the rose 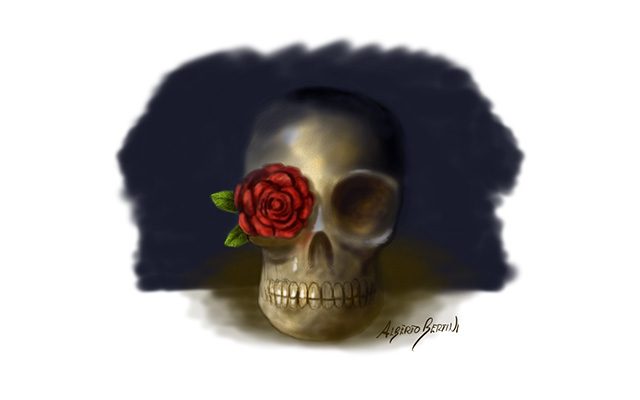 I read that people are attracted to symmetry: the more a face is symmetrical, the more attractive it is. The skull, like the rose, has an extremely balanced shape. The union of these two harmonic forms creates a balanced, classic, elegant, timeless whole.

When there is symmetry, it is nice to break the rule, while maintaining the general harmony: the flower in a single eye of the skull, the irregularity of the petals, the alternating colors can add interest and mystery to a tattoo, a painting or any representation.

It enhances life: a message of eternity 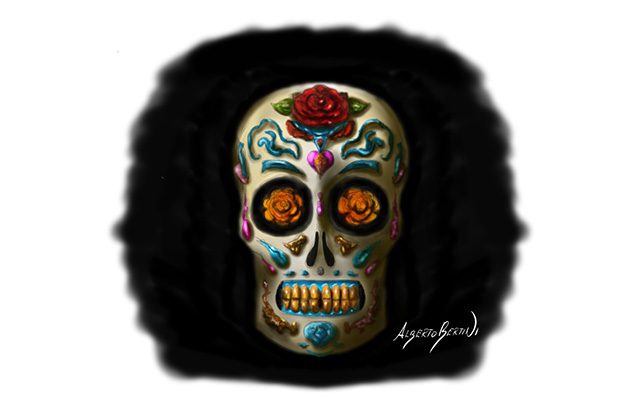 Many years ago, I was passionate about a video game: Grim Fandango, set in a bizarre Land of Death, Mexican style. The protagonist is Manny Calavera, a skeleton working as a travel agent to the afterlife. Here the flowers represent the death of the dead: if hit by a bullet of their special guns, the characters “bloom”, dying forever wrapped in colored flowers.

In many cultures, however, the flower is a symbol of rebirth. Edvard Munch said:

“From my ruined body, the flowers will grow, I will be in them and this is eternity.”

Putting a rose over a white skull, therefore, is a message of eternity: in some way, we will continue to be there, under new forms.

The inspiration for the Ring “Los Muertos Skull” 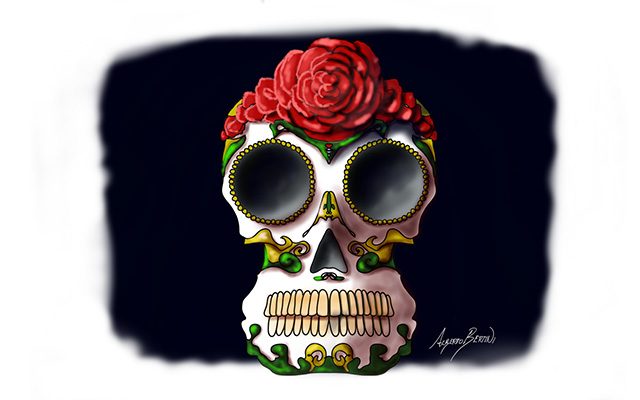 We have done countless studies to determine what the style of the Los Muertos Skull Ring should be. We wanted to show at once the cheerfulness of the Mexican skulls and the triumph of the red rose.

The final result has been elaborated by our artist modeller Andrea, created especially for the Maso, a famous tattoo artist from Brescia, Italy.

The Mexican skull with rose had to be symmetrical, so we put a skull with its teeth clearly in evidence; n the empty space we put a big central rose, with decorative petals, like a crown . The cavities of the skull’s eyes, slightly smaller than the rose, are perfectly round and decorated with a crown of little spheres.

Lastly, we put some doodles and curls, typical of Mexican calaveras.

The meaning: as death smiles at everyone, send her a beautiful smile too. Life, in front of her, is even more beautiful and precious.

One thought on “Mexican Skull: meaning, history and uses”