«Below the thunders of the upper deep,
Far, far beneath in the abysmal sea,
His ancient, dreamless, uninvaded sleep
The Kraken sleepeth […]» (Lord Alfred Tennyson)

Violent and enemy of mankind, the kraken is an abnormal aquatic monster resting on the depths of the northern seas. So big it can be confused for a group of islands, for some it looks like a giant octopus, with the powerful tentacles able to wrap the boats and drag them into the abyss.

Just a fascinating legend? Not exactly. The kraken could identify the gigantic cephalopods that actually populate the abysses, such as the giant squid or the colossal squid. Linnaeus himself, the father of the modern scientific classification of living organisms, wrote about the kraken and its name often returns in the chronicles of the explorers.

In a few lines I will tell you the legends, the forms, the descriptions about the kraken. Before taking off, however, here are two premises:

The Kraken as Giant Squid (Architeuthis) 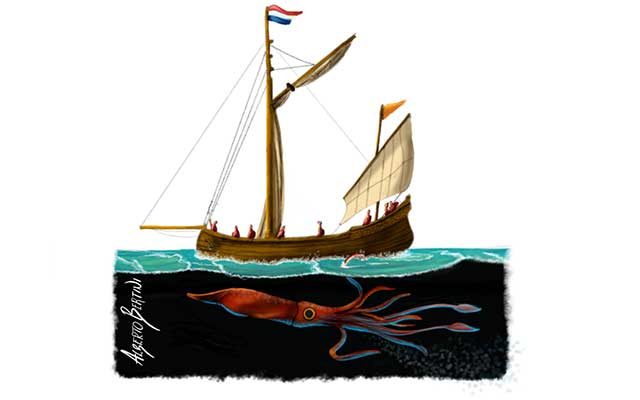 Some say that legends always have a basis of truth and may be the case with kraken. In fact, from the descriptions we received, this sea monster was gigantic and appeared like a great octopus, with tentacles that could wrap a ship. Is there something like this in nature? Yes. The giant squid, for example, reaches the length of 13 meters from the fin to the tip of the two longer tentacles.

If we compare these dimensions with the typical boats of the North Sea, we can better imagine the size of a gigant squid: a ketch boat, widespread for centuries in the North Sea, reaches 30 meters, slightly longer than the mythical drakkar of Vikings. In the eighteenth century, when the kraken populated the stories of the Norwegian sailors, a widespread fishing boat in the North Sea was the dogre, a boat that hardly exceeded 15 meters in length.

In short, the giant squid rivaled most of the fishing boats that sailed off Scandinavia. Widespread in the depths of all the oceans, it is also present in the waters of Norway. In fact, its appearance is disturbing: it has gigantic eyes, a cloak culminating with a fin, eight arms and two very long tentacles.

Is it aggressive? There are documented attacks, even in recent times, from giant squids to boats. In 1980 an architeuthis, for example, attacked a French submarine at a depth of 3,000 meters and violent assaults took place on the surface.

Also, there is often another cephalopod that could have inspired the myth of the kraken: the colossal squid (Mesonychoteuthis hamiltoni). The colossal squid, however, lives in a much narrower range, in the waters adjacent to the South Pole: too distant from Scandinavia. Basically, it is in no way possible for a Norwegian fisherman to have sighted one of these specimens.

The Kraken as a terrible island: l’hafgufu 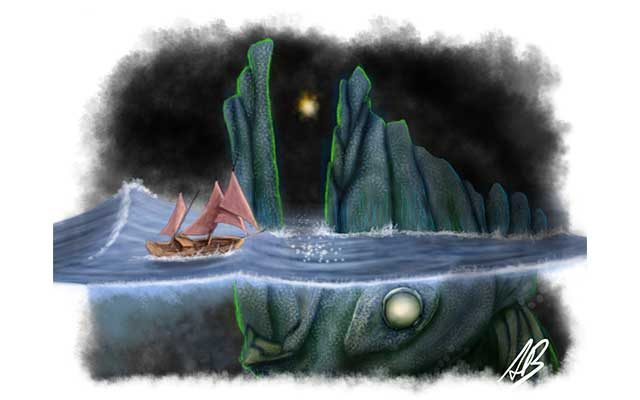 Most of the authors who describe the kraken in the eighteenth century, often associate it with a sea monster already described in the late Middle Ages: the hafgufu. The hafgugu is a giant beast, having the shape of a couple of islands or high rocks outcropping from the sea.

Its name evokes mystery, because in ancient Norwegian hafgufu means, literally, sea fog. Its enormous shape, in short, appears to the navigators in the mist that covers the waters, without showing its forms in a definite way. There are two ancient texts that describe the hafgufu: the Norwegian “The Mirror of the King” and the Icelandic “The saga of Odd the archer“. In both cases, the monster is large enough to be able to devour ships and whales, with nose and mouth that look like rock and a body that is indistinguishable from an island.

This myth probably derives from the suggestion of the Nordic sailors who crossed the fjords covered by fog: in poor visibility, they often had the impression of seeing islands that were not there before, as well as strange movements of the rocky walls. As told in the stories, the sailors just hoped to leave its jaws behind before the hafgufu closed its mouth.

The Kraken in scientific descriptions

If you go a bit deeper in the research on the Kraken, you will certainly come across the Danish Erik Pontoppidan, author of the work “The first attempt of a natural history of Norway”, published in 1752. Pontoppidan describes with great care the Kraken, assuming it is a real animal.

Pontoppidan tells us that the greatest danger for the sailors was not related to attacks, but to the simple movements of the sea monster on the seabed, able to generate vortices of such a power to swallow the boats.

The description of Pontoppidan brings together the giant squid and hafgugu, describing a sea monster that when it surfaces can be mistaken for many small islands, with such powerful tentacles that they can wrap and drag a war frigate into the abyss. The kraken emits a particularly pleasant smell for the fish that come so close in large numbers, and then be eaten.

The sad story of Montfort’s Kraken 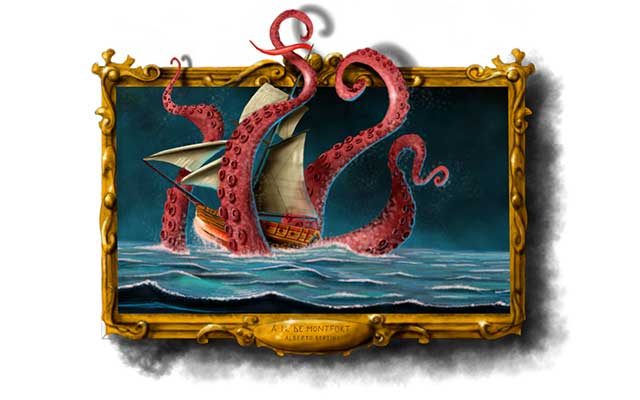 That’s true: some scholar in the past really believed that the kraken really exists. In this regard, I want to tell the sad story of Pierre Dénys de Montfort, an unfortunate naturalist. Montfort has dedicated his life to demonstrate the existence of giant octopus and in one of his works, in particular, he describes the octopus-kraken (le kraken-pieuvre in French).

In 1782, 10 British warships disappeared suddenly and Montfort made a very risky hypothesis: it was a giant octopus! Unfortunately for him, the British say that it was because of a hurricane. In addition to destroying ships, the hurricane also overwhelmed the reputation of Montfort, who will end his life in total poverty, starving in Paris, teased by other scholars.

In fact, Montfort, describing the kraken, contributed to the discovery of the giant squid, which will be proven to exist only in 1857.

Valuable naturalist, has cataloged and identified 129 kinds of mollusks, with taxonomic discoveries still valid today and also for this has all my admiration.

Poor Montfort, in hypothesizing the existence of the kraken, paints a beautiful illustration. As a tribute to him, I reinterpreted it in this article, in the cover painting.

The gigantic crab and the kraken volcanoes 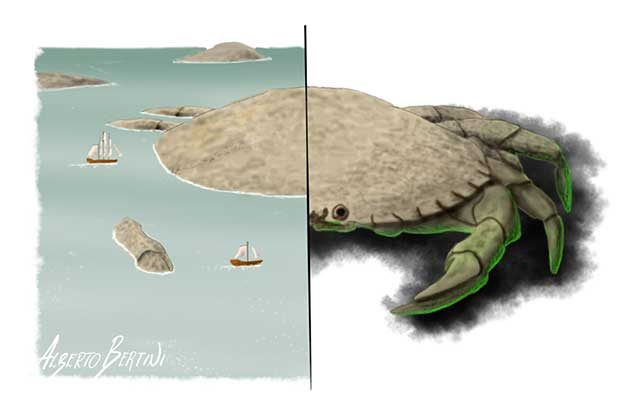 Some authors describe the kraken just like a huge crab. Wallenberg, a Swedish author, in 1781 states that the Kraken is also called “the crab fish”, then making a similar description of Pontoppidan’s.

The great mistery of the kraken, in short, lies precisely in the indeterminacy of its form, pending between islands, octopus, rocks and crustaceans. Mysterious and unknown, it will inspire extraordinary poets, painters and writers.

Personally, I like to think that the legend of the Kraken derives in large part from the true observation of the giant squids in the North Seas, even if it is rare that they come to the surface. A second hypothesis, very fascinating, brings together the suggestion of the kraken with the underwater volcanic activities of Iceland, with their continuous and disturbing bubbling.

The kraken is the sea monster that best represents the ambiguous mystery of the abyss, indefinite and indefinable, true and legendary. A beautiful Latin proverb says: IN MARI MULTA LATENT. In the sea, many things are hidden. Thus the kraken and its fascinating secrets.

The cookies defines under this category are absolutely essential for the website to function. Hence they are loaded by default irrespective if user consent.

They allow the user to recognize subsequent accesses, in order not to have to enter the access data for each visit. These cookies, although not indispensable for the functioning of the site, improve the quality and the browsing experience;

These cookies are used to collect information on the use of the Site by users such as: pages visited, time spent, origins of the traffic of origin, geographical origin, age, gender and interests for the purposes of marketing campaigns. The site will use this information for statistical analysis in order to improve the use of the Site and to make the content more interesting and relevant to the wishes of users. These cookies are sent from third-party domains external to the Site.